It was an ordinary June day but I was determined to take up Mike’s offer to join his school group hiking the Grasslands Community Trail. 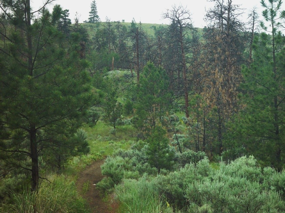 Mike and I had previously worked some website development and were thinking seriously of creating an intelligent trail to enrich this unique hike.

Until this day it was only an academic exercise based on pictures and his descriptions. I knew it was something he was passionate about and thought it would be a good experience. I met up with the group at the old Westsyde Elementary School  site.

After getting the group organized we headed up Ida Lane using  the subdivision road by the communications and water tower. There was a new sign near the subdivision where crown land encroached on private land. 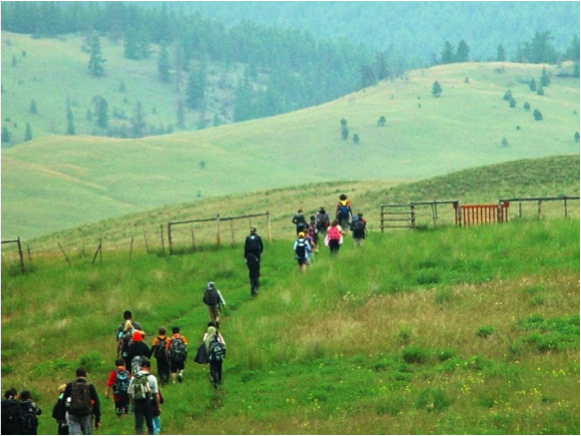 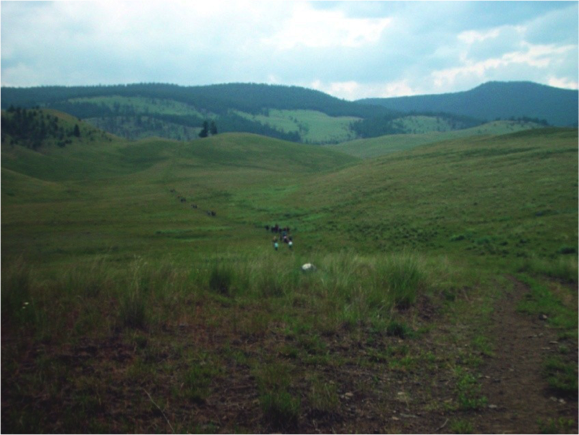 Lots of sage and rabbit brush near the trail.  It was a little confusing as to the appropriate entrance to use. Thanks to the teacher in charge of  McQueen Lake Environmental Centre we were redirected around to the south of the water tower and were immediately into the lower grasslands. There was more sage and some clumps of aging bull pine trees. We immediately got the message this was an uphill climb and found our breath. 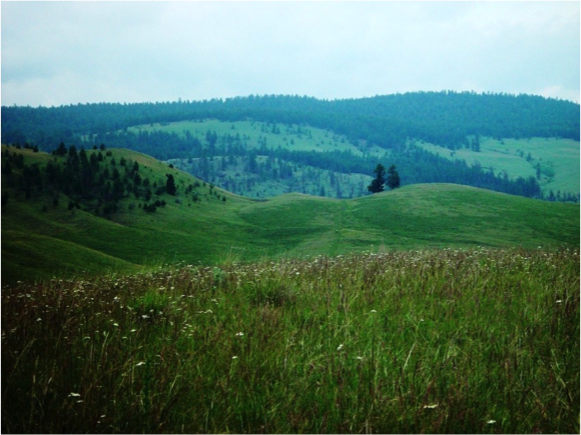 The trail took us up and over a little rise leading to Deep Lake. It was a trail that reminded me of an alpine meadow by a high lake you might see in a National Park but this was a half hour walk from Kamloops – something that is unique. The kids were great. They were enjoying the view and the adults were beginning to feel the change in elevation.

As we passed Deep Lake we headed up and around on an old road which had markers for  fibre optic cable. We followed this cart track and noticed that there was less sage and very few trees. In fact, as we emerged on a wide expansive plateau, we saw grass as far as the eye could see. As we looked ahead the trail stretched out in a long sweep up to a hill crest with two large trees that seemed to be out of place. Very little evidence of anything man made was visible except for a fence part way through the vista. As we walked past the second lake we found mosquitoes that were brown compared to their darker city cousins. 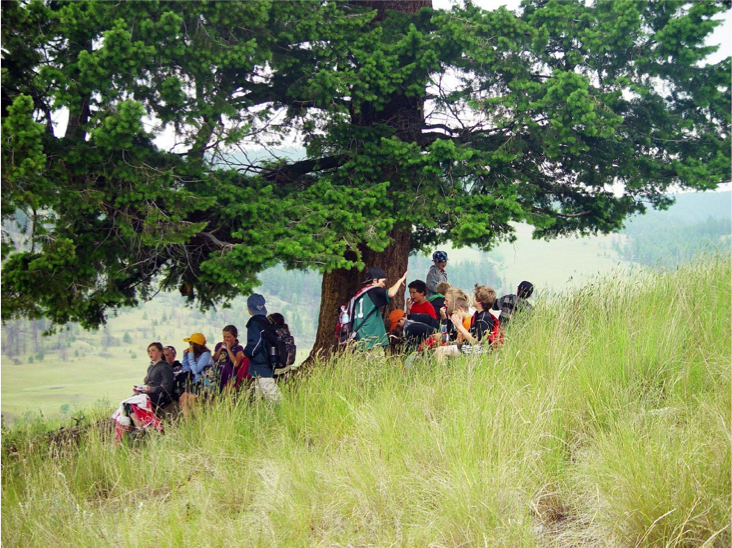 After a long walk through these grasslands we finally emerged at the trees which Mike affectionately called “marker” trees. The kids were eating their lunch under the trees away from the sun which was starting to come through now. On top of the hill beside the marker trees you could see for miles and clearly mark the different ecological zones. The lower, middle and upper grasslands, the transition zone into the Douglas Fir forest and the big snag on top of the hill across the valley. This was where we would pass through the ranch lands on top of the ridge by McQueen Lake. 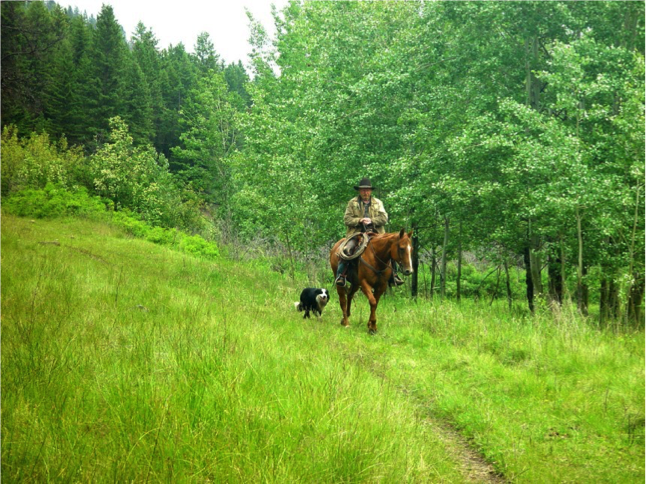 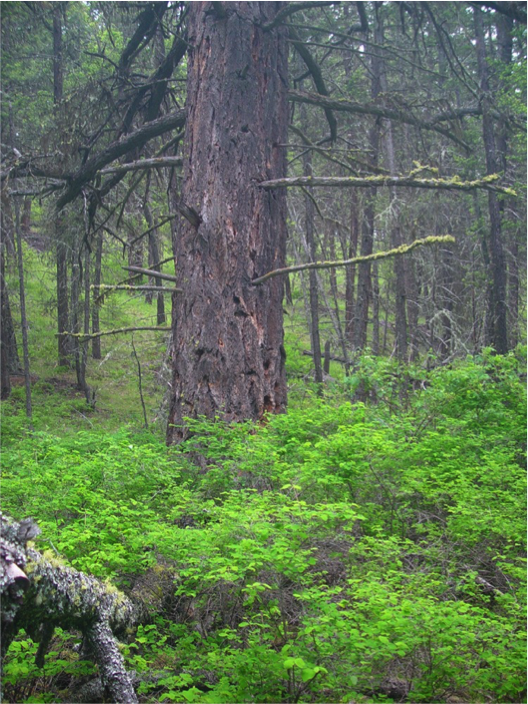 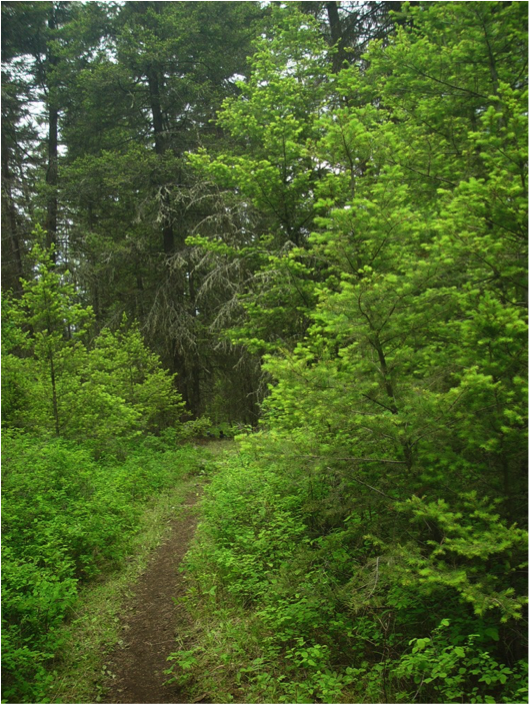 Mike was especially worried about bears in the gullies and suggested that we move out ahead through the transition zone to scare any away before the kids walked through behind us. The only wild life we saw was a cowboy and his dog who were out checking on the cattle they had grazing in the area. 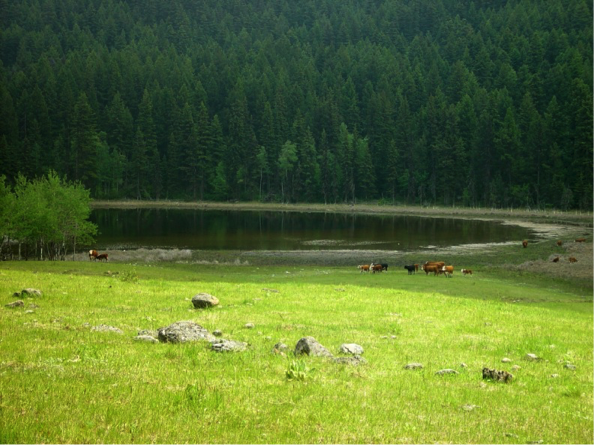 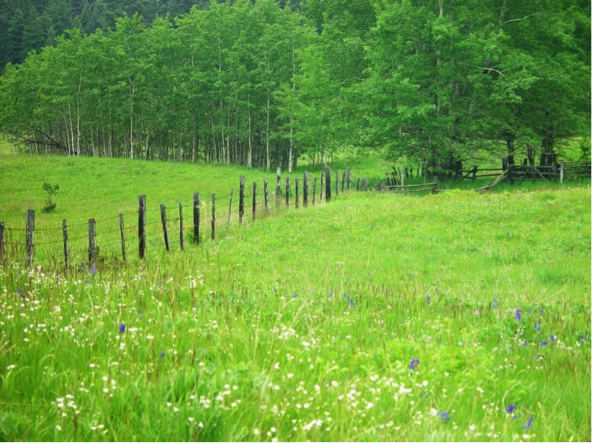 As we headed through the transition zone we stopped at the outhouse in a small clearing that really was at the point where the Douglas fir forest started. So did some serious uphill climbing – 200 meters or so to the snag. A small group found an alternate nature walk until they were rounded up with the rest of the group. After testing our physical stamina we finally got to the top of the ridge. Amazingly there were no complaints from the kids as they moved along the steep part of the trail. The forest was quite dark with very little vegetation in this area.

What I remember vividly was the variety of colourful flowers we encountered.This continued into the trees as we came closer to McQueen Lake where we saw lady slippers and sunflowers. When we arrived at McQueen Lake it appeared to be an amazing facility with a number of lodges and a central cook house. Of course we headed straight to the cookhouse to get recharged with a late lunch and water. 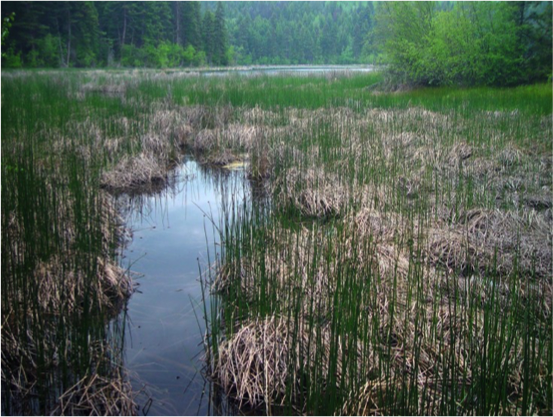 I will always remember this day as the one I did something a little different, the day I got a lot of exercise and the day I learned something new about the world we live in. What an amazing experience.  It is wonderful to think how easy it is for everyone to do this if they choose. 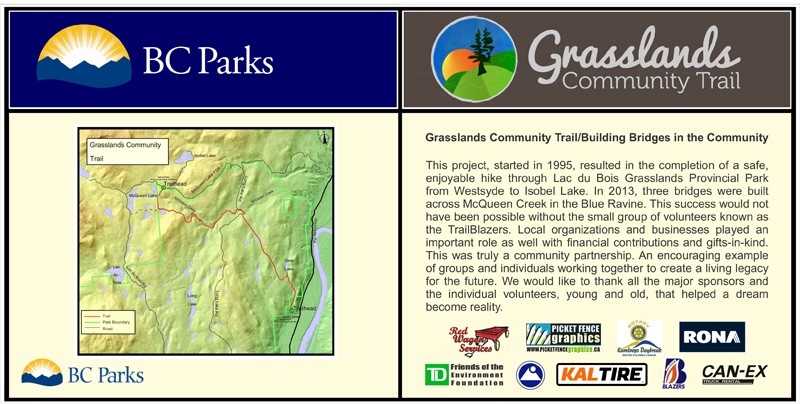 KamloopsNewsAndReviews website may contain affiliate links to products and may receive a commission for purchases made through those links.